The Last Days of Lehman Brothers (2009): The heads of Wall Street's biggest investment banks were summoned to an evening meeting by the US Treasury Secretary, Hank Paulson, to discuss the plight of another - Lehman Brothers. After six months' turmoil in the world's financial markets, Lehman Brothers was on life support and the government was about to pull the plug. Lehman CEO, Dick Fuld, recently sidelined in a boardroom coup, spends the weekend desperately trying to resuscitate his beloved company through a merger with Bank of America or UK-based Barclays. But without the financial support of Paulson and Lehman's fiercest competitors, Fuld's empire - and with it, the stability of the world economy - teeters on the verge of extinction. —BBC press release 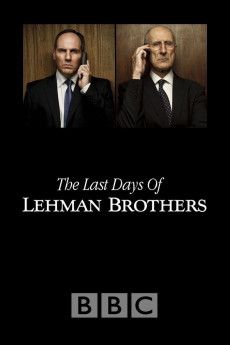 John Thain: Are you gonna help them? AIG?

Henry 'Hank' Paulson: There is no public money for a bailout of Lehman Brothers. If we can't figure out a way to keep them standing, thery're going to be bankrupt when trading opens in Japan on Monday.

Henry 'Hank' Paulson: The west is fucked. We fucked it up. Oh, not just you and me. All of us. The west, it's done. It's over. You want to call it a game? This is the game. You want your great-grandchildren speaking Chinese? The dollar is going to go. We had Rome, then Europe then this. Us. This thing with cars and stereos and hula-hoops. And we screwed it all up. We ran through it all. This stuff. And we've come out on the other side where it's... I dunno. Where is this place? Oh yeah. We have this one weekend where maybe we can come up with something to hold it all together a little while longer.

Richard 'Dick' Fuld: I want everyone on message about this: Our situation is serious, but it's not critical. I repeat, the situation is not critical. Bank of America wants us. Barclay's wants us. We can choose. and which ever we choose will fill us with new air. i need everyone to believe. YOU'RE ON THE THIRTY-FIRST FLOOR, GODDAMMIT! And I want this message to trickle downwards.

Henry 'Hank' Paulson: I know all the arguments against this! I've been on the phone with Dick for six months, trying to get him to sell, but the price was never high enough for him! He thought he had all the time in the world. Well, he didn't. He thought he was playing with the casino's money. Well, he wasn't. That's enough, now. Got to clean up this mess. Somebody had to fail. Lehman Brothers has failed.

Zach: [voice over] If you talk to 100 people, 102 are going to tell you they hate bankers. But most people won't be able to tell you why.

Harvey Miller: [having been ordered by Dick Fuld to prepare a billion dollar bankruptcy petition over the weekend] First of all, we don't have a team. Second, YOU don't have a team. Everyone's working on due diligence for the mergers. Third, nobody can put together a bankruptcy of this size in two days. And fourth, the government's not going to let you go down. Richard 'Dick' Fuld: Paulson's opening position is that we sink or swim. Harvey Miller: Are you kidding? [realizing that Fuld is serious] Harvey Miller: It would be a financial disaster the likes of which the world has never seen before. It'd be like the American government itself going bankrupt. It would be like the US dollar being rendered worthless and everyone being told to start over with goats and pebbles. It would be like Rome selling the Vatican to the Japanese to make it a hotel, and hiring the Pope as a bellboy. It's just a fantasy. It's a through the looking glass world. It's something from the book of Revelations. Richard 'Dick' Fuld: And he cried mightily with a strong voice, saying, Babylon the great is fallen, is fallen, and is become the habitation of devils, and a hold of every foul spirit, and a cage of every unclean and hateful bird.

John Thain: Now I'm going to get up I'm gonna have a coffee before I have another thought... Greg Flemming: When you watch Bart [McDade] Greg Flemming: make his pitch today, just imagine, next week, being in his place. What if we save Lehman? Have you thought about that? 'What if we all pool our resources and rescue them? 'What happens to the next company, the next one up in size?' It's us, John. You know it's us.

Ezzy: The bankers liked CDOs so much they wanted more and more of them, and they didn't care if somebody couldn't pay because they just wanted the loan papers to call Securities and then to turn into CDOs to sell them as fast as they could anyway and make a huge whopping profit overnight. So they didn't care what the paper's worth. I mean, paper ain't worth nothing unless two crazy people's willing to pay each other for them.