Surviving the Game (1994): Jack Mason (Ice-T), who lives on the streets, wants to cease his life when on the same day his two best friends die: his dog and an older man with whom he shared his food and roof. Just in time, Walter Cole (Charles S. Dutton), from a charity organization, can prevent his suicide and also offers him a quite well-paid job as servant for a hunting party in the Rocky Mountains. Mason accepts the job and flies with them to a hut in the wilderness where they prepare everything for the four rich businessmen who want to hunt something special. Mason does not yet know that he is the victim of their sport that should lead to the basic insticts of man, but they did not count on his cleverness. —Volker Boehm 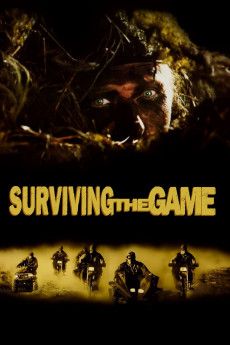 Jack Mason: [last lines, while aiming Burns' own custom-modified hunting rifle at him] BANG! Game over. [He unloads the gun and discards the bullets, then drops the rifle and turns away. As Mason walks off, Burns gets up and recovers his gun] Burns: [reloading his weapon] This is my lucky day. Hey, Mason...! [Mason doesn't even look back] Jack Mason: Burns, there's one thing you should do first, when you find a gun. [a closeup of Burns' hunting rifle reveals that Mason has jammed it with a tightly-wadded cigarette] Burns: ...Say cheese. [He pulls the trigger and his rifle backfires explosively, killing him instead of Mason] Jack Mason: ALWAYS check the barrel. [He continues walking off into the moonlit evening, as the credits roll]

Doc Hawkins: [has the upper hand against Mason, in a life-or-death brawl right outside the hunting lodge, which is now on fire] ... I like my meat RARE! Jack Mason: [suddenly tricks Hawkins and throws him into the lodge's trophy room, which is stocked with "flammables." A second later, the room explodes and the entire lodge follows suit] ... Try well-done, Bitch!

Doc Hawkins: I know more about you than even you think, Mason. Jack Mason: Probably so, but I don't know *jack* about you. Doc Hawkins: Then ask me something. Ask me anything you want. Jack Mason: All right... How did you get that fucked-up scar up your eye? Doc Hawkins: I refer to this as my birthmark. On my eighth birthday, my father brought me a fat little bulldog. I named him Prince Henry Stout. He was strong. He chased my pet turkey, he chased squirrels up the tree, he chased everything. I raised him, I trained him, I groomed him, I fed him, I took care of him. I loved that dog; more anything in the world, I loved that dog. Then my father gave me a handful of cherry bombs and M-80s. He said: "You're gonna train this dog to be a protector". So, every Saturday afternoon, I got behind a little dummy that my dad built. I tossed cherry bombs and M-80s at the dog - BOOM, BOOM! The dog was scared at first, but after awhile he got angry and charged the dummy. [He mimes PHS rushing and attacking] Doc Hawkins: He ripped it apart. The head was off, the shirt was gone... So, thirteen years old, birthday time. My father got me a twelve-gauge shotgun. "We're going hunting!" I was so excited. We went out to this clearing in the woods where my dad laid his gun down, then took my gun and laid it down. He said: "Son, today you're gonna learn to control your emotions. You're gonna do things that some men are unwilling and *unable* to do. Follow me". My dad and I passed through this grove of trees, to where he'd built a corral. There was Prince Henry Stout chained in the middle of the corral. My dad took out a pocketful of cherry bombs and put them in my hand. He said: "Get in the corral. Here's a Bic; I want you to light those cherry bombs and throw them at the Prince. You're gonna face manhood. You're gonna fight that dog to the death. Either he's gonna kill you, or you're gonna kill him... NOW!" [He mimes lighting the cherry bombs, their explosions, and PHS growling] Doc Hawkins: He was on me, like flies on shit. I had one chance - I got my arm up in between his teeth and my neck. Then we were down in the mud, rolling over and over. That dog was baying and snarling and biting, while I was crying and screaming. I grabbed him and stood up, then fell on him with all my weight. I heard his neck break. He was dead, not biting, not even breathing. I was covered with blood. I stood up, wiped the blood off, and licked it. Then my dad said: "Welcome to manhood!" That's why this is a birth mark. [He indicates where PHS bit him] Jack Mason: ...Do your patients know this story? Doc Hawkins: No. But *you* do.

[a pig's head has been served for dinner. Mason takes a sip of wine] Wolfe Sr.: What do you think? Jack Mason: It's alright. I like this. This is good! Wolfe Sr.: Four-fifty a bottle. Jack Mason: Four dollars fifty cents, I should be drinkin' this shit a *long* time ago! Wolfe Sr.: Four hundred and fifty dollars! [Mason spits out the wine in amazement] Wolfe Sr.: Don't waste it! [They all laugh] Jack Mason: I could live off that for three months! Cole: Well, you don't want to drink too much, anyway, 'cause you don't wanna be slow tomorrow! Wolfe Sr.: No, indeed. [Doc turns the pig's head toward Mason while making squealing noises] Doc Hawkins: You are missing the best part, Mr. Mason. When you're eating the flesh of the pig... look into his little beady eyes. That way you will be devouring his soul. Burns: Doc, sometimes you even scare *me*! Doc Hawkins: Good. [smiles deviously]

Burns: Life's true pleasures are so unpredictable. I'd say cherish the moment for it is. Observe your food, smell it, touch it, put your mind into it, and you're finally ready, consume it slowly. Jack Mason: Hmm, you do your way, I'll do mine.

Cole: Man, I've been through rough times. Jack Mason: Like what? Your Jacuzzi broke?

Cole: You know why we're gonna find you, Mason? Cause I can smell your stinkin' ass from here.

Doc Hawkins: [Doc tackles Mason to the ground with his knife drawn, then suddenly discards the knife] We're going bare hands...! Tell your wife and kid I said hello, Dog-turd!

[a taxi just ran over Mason's dog; the driver is pointing at the blood on the cab's front end] Taxi Driver: What about my taxi? Jack Mason: Yo', man, fuck yo' taxi!

Jack Mason: [to Burns] What is it about hunting animals that gets you off?

Burns: Alright. Let's get the turkey!

Cole: The only thing I miss up here is a sport page. I'm so used getting up, having my morning coffee and opening up the sport page. Burns: I don't read newspapers anymore. They're like a mirror of the world's ugliness. I like beautiful things. Doc Hawkins: [Doc gets up very enthusiastically] I'm ready to go. Let's go Burns: Relax, Doc, digest your food. Doc Hawkins: Wasting time. Burns: We gotta give him some more time. Doc Hawkins: No. Burns: Think of this as foreplay. Doc Hawkins: Nevermind foreplay, I'm talking about... [Sharply interrupted] Burns: Doc, Prince Henry Stout. Remember the rules. Doc Hawkins: I feel something special about this. Burns: It's gonna be so much more special when you finally kill him. Derek, eat some of those eggs, they'll make you feel better. Doc Hawkins: Eat, eat. Derek Wolfe Jr: [Shockingly depressive] I'm not hungry. John Griffin: Big one? Derek Wolfe Jr: I said I'm not hungry. John Griffin: [Griffith stands up and changes his plate with Derek's and Derek gets out of the table] Well, terrific. I'll tell you what let's switch around here. Burns: I hope this is not gonna be a problem? Wolfe Sr.: It won't be. Derek Wolfe Jr: [Wolfe Sr. comes to terrified Derek] No. Wolfe Sr.: You'll be okay. Derek Wolfe Jr: No, I can't do this. Wolfe Sr.: Yes, you can. I got a thousand dollars is my son will draw first blood. One, two, three. You've just made yourself three thousand dollars, Derek.

Jack Mason: You're a doctor? You don't look like one to me. Doc Hawkins: I'm a psychiatrist. Jack Mason: A shrink? Doc Hawkins: What, does it surprise you? Jack Mason: No offense, but somehow you don't seem like the type that fucked-up rich people shell out money for, just so he'll sit around and listen to their personal shit. Doc Hawkins: I work for the Company... You know, the CIA. I know these gentlemen's "personal shit" completely.

Jack Mason: [fires shotgun] Yo Cole, yo' mama's up here! You know, I'm tired of listening to this faggot motherfucker!

[Mason and Hank has just stolen some meat] Security Guard: Well well, I finally caught your ass. Hank: We're just hungry, partner. Give us a break, will ya? Jack Mason: Yo man, we don't want no trouble, we'll give it back! Security Guard: To hell with giving it back! It's already been contaminated with your filth! Somebody's going to PAY!