Guns at Batasi (1964): Regimental Sergeant Major Lauderdale (Sir Richard Attenborough) is a by-the-book, strict disciplinarian, who seems like an anachronism in a sleepy peacetime African outpost of the modern British commonwealth. Ridiculed behind his back by his subordinate N.C.O.s, he must play host to a liberal women M.P. making a tour of the base. However, when an ambitious African officer, who happens to be a protegè of the M.P., initiates a coup d'etat against Captain Abraham (Earl Cameron), the lawful African commandant, the resourceful Sergeant Major uses all of his military training to save his men from a certain firing squad. —Gabe Taverney (duke1029@aol.com) 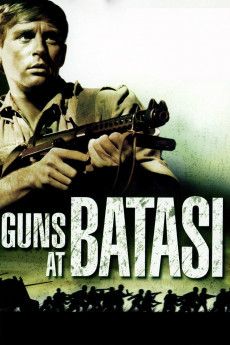 RSM Lauderdale: I have seen Calcutta. I have eaten camel dung. My knees are brown, my navel is central, my conscience is clear, and my will is with my solicitors, Short and Curly.

RSM Lauderdale: Will you stick a boomerang in that great Aussie cakehole of yours until I've finished?

RSM Lauderdale: [Instructing his men on how to behave for the MP] Now, I want you all behavin' like Little Lord Fauntleroy. No blasphemy, no obscenity, and, above all, no bad language!

RSM Lauderdale: I can always stomach a good soldier whatever his faults! What I can't stomach are Bolshies, skivers, scrimshanks, and boghouse barristers! I've broken more of them than you've had eggs for breakfast! If I take a likin' to you, lad, I'll be your good friend and counselor. If you offend me, I'll pull out your sausage-like intestines, hang 'em round your neck, and prick 'em every so often like they do real sausages!

Miss Baker Wise, M.P.: You're a human gun! They've turned you into a human rifle!

RSM Lauderdale: I have seen Calcutta. I have eaten camel dung. My knees are brown, my naval is central, my conscience is clear, and my willy is with my solicitors Short and Curly.

Lt. Boniface: You will appreciate that it is I who give the orders and you who will obey! For the first time in the history of my country, Sergeant Major, it is the African who is putting the shell into the breech and giving the order to fire! RSM Lauderdale: Really, Mr. Boniface? I don't think I've ever come across a misfit of your size and quality before. You've missed your vocation. You ought to be in Hyde Park! If you do happen to go putting a shell into the breech, sir, I sincerely hope that you'll remember to put the sharp end to the front.

RSM Lauderdale: Let me tell you. There's no alteration, no celebration. No argumentation, no qualification in this mess that escapes my eyes! Read, learn, and inwardly bloody digest!

RSM Lauderdale: Mutiny? It's like the Loch Ness Monster. Heard of it but never actually ran across it!

RSM Lauderdale: [after being able to bluff his way easily past an African guard] That's Corporal N'timba. Never make sergeant! No initiative!

RSM Lauderdale: I wonder they didn't make you a sergeant! Pvt. Wilkes: I had a stripe once. Lost it in a fortnight.

Col. Deal: [Refering to the new revolutionary leader of the country] Five years in jail, and within six months of coming out, he's on his way to the President's Palace! Fletcher: He spent that six months here as a gardener. Got to know him pretty well. Lousy gardener! I hope he'll make a better president. Anyhow, going to jail is considered a shortcut to power these days! Col. Deal: I hope it never happens in the army!

RSM Lauderdale: What are you huddling about there like a brood of wet hens? Wilkes, get back on guard! Schoolie, get that ammo stowed away! Miss Eriksson, can you cook? Karen Eriksson: Oh, yes. RSM Lauderdale: Well, I expect the dinner's spoiled by now but do what you can. Karen Eriksson: Yes, sir. RSM Lauderdale: Muscles! Dodger! Get that table tidied up. It's the Queen's birthday, and even if we have to have paraffin and brick dust sandwiches we're gonna celebrate it. With or without our distinguished guests.

Miss Baker Wise, M.P.: But Boni, I-I don't understand you. When you were in England you were so different. Lt. Boniface: Yes, I was one of your African mascots then, wasn't I? Sitting at your feet listening to you talk, my God, how you talked! No one talks better than the British; they drug you with talk and when you wake up they still have their heel on your neck.