Dead Bang (1989): A cop is gunned down on Xmas eve. Jerry Beck, the homicide cop given the job of hunting the killer, investigates some leads which bring him into contact with a group of white supremacy extremists. In addition to the racists, Beck also has to contend with an unhelpful FBI agent. 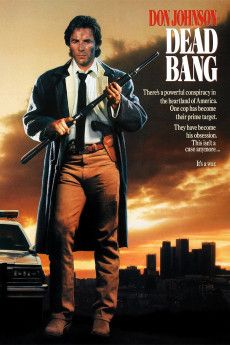 Jerry Beck: Come on, Kressler, open your eyes. These people aren't a rag tag bunch of yahoos that drink beer and run around in sheets on Saturday night. They've got money behind them. They've got strong pockets of community support. Arthur Kressler: No proof. You don't know that for sure. Jerry Beck: The hell I don't. We just walked out of one. Who the fuck do you think called ahead and warned Gephardt? They were standing on the fucking porch when... Arthur Kressler: Excuse me. As one professional to another, I would appreciate it if you minimised your constant use of profanity. Jerry Beck: You're kidding? Arthur Kressler: No, sir, I'm not kidding. Jerry Beck: I'm telling you something's going on here. I'm telling you something big is happening here, and all that grabs you is my language? What the fuck is the matter with you? Arthur Kressler: That's a good example. I'm a Christian, Beck. I'm sure that seems like probably a joke to you, but I find your language personally offensive.

James Ellis: Jesus, son of a bitch fucking threw up on me, man. Goddamn it, you asshole! Oh, God, get me out of this, dude, come on. Jesus Christ. Oh man, you're a real asshole, you know that? It's all over me, man. Come on, let me up. Why don't you just shit on me while you're at it? Jerry Beck: [to Webley] Do you think this will wash out of my tie?

Jerry Beck: I'll be finished in a minute. Keep an eye out for the cops. Elliott Webley: I will not. I will not be a party to this, Beck. I will not allow this to happen under my aegis. Jerry Beck: Under your what? Elliott Webley: My aegis. My, er, auspice. I'm responsible here. Jerry Beck: [to Ellis handcuffed on the ground] You hear that? He's responsible here. But I'm not. Now Goddamn it, I need some answers here. I've got a splitting headache. I'm seeing double. Shit, I think I'm going to throw up over. James Ellis: He took off in a wagon. A brown, er, maroon Ford wagon. Said something about going north to Bakersfield. That's all, that's all. He didn't say anymore and I didn't ask. That's it. Jerry Beck: You sure? James Ellis: Yeah, don't puke. Don't puke!

Bobby Burns: He's no Fed. Fed's are neat. Whoever this guy is, he wouldn't last a week with the Feds. The other guys coming over. now *he* is a Fed. Look at him. He's so clean you could shoot him and bury him in the same suit.

Elliott Webley: If I were you I'd give AA some thought. Alcoholism is a disease, you know.

Elliott Webley: Ah, honey, I'm telling you the truth. Sweety, I think the man is physically dangerous. Ah ha. Wait a minute, he's doing something. Me? I'm at a Chinese restaurant. Honey, sweety, I don't think the Chinese celebrate Christmas.

Chief Hillard: Let me give you a piece of advice here, Beck. You're a big city cop. If I was in the big city I'd listen to you. But this ain't the big city, this is Cottonwood, population twenty two thirty one. I'm the chief of police. This is my town, my territory. I'll make it real simple, nobody is gonna fuck with me here.

Arthur Kressler: [Beck is reading a pamphlet to Kressler] Sounds like typical white supremacy rhetoric to me. Jerry Beck: Yeah? You mean they just sit around and write this shit all the time? Arthur Kressler: Half of them are in prison anyway. I suppose it helps them pass the time of day. Is that tape on your glasses? Jerry Beck: Yeah, I lost one of those little screws. It fell out.

Jerry Beck: [under sign saying: NIGGER! If you don't live here - don't be here past sundown] Cute sign, chief. Chief Elton Tremmel: Yeah, fuckin' ACLU. Commie Jew bastards made us take it down. Used to be out front. Don't make no difference. Ain't no nigger gonna stay in this town after sundown. Oh, by the way, I briefed my boys. No sign of a maroon Ford wagon so far. Are you cold? Jerry Beck: Does it show? Chief Elton Tremmel: Yeah, blue lips'll give you away every time. You California boys have got it too easy. All that sunshine and pussy thins the blood. Jerry Beck: Yeah, that's us. Land of milk and honey. Morning briefings on the beach. And every once in a while some asshole kills a cop and everybody gets pissed off. No more beach, no more sunshine and pussy until the guy's caught. Yeah, we draw straws out of our Banana Daiquiris. Which is why I'm here, chief. [smiles] Jerry Beck: Short straw.

Jerry Beck: You know, I don't believe I've ever seen a cross like that on a church before, reverend. Exactly what denomination is that? Reverend Gebhardt: The Aryan Nation Church of Christ, Mr Beck. Jerry Beck: How does that differ from say, oh, the Baptists?

Captain Waxman: Oh, it's agent Kressler. It's a PO named Webley. It's patrol officers from Kimble's murder who said you acted in an insensitive manner. It's a Goddamn Greek chorus of folks, Jerry. There are complaints of excessive drinking, language unbecoming an officer, physical intimidation and kidnapping. Jerry Beck: I didn't kidnap anyone. Captain Waxman: Aw, that's a beautiful rebuttal considering the list of charges.

Jerry Beck: You're not a safe man to put in this office, Dr Krantz. If I get pulled off of this case because you look like Woody Allen, I will not be responsible for what I do. If you've got some dues to pay there then by God you pay them because I will not! I will fixate on you as the instrument of my destruction, and you will never feel safe in your world again.

Jerry Beck: Thanks for all the help. Sorry, Kressler, but me and the doc, we got along just like that. [crosses fingers] Jerry Beck: Two peas in a pod. Arthur Kressler: Really? What did you do, threaten his wife and kids?

Jerry Beck: Fuck you, Sherrif! And your french fries.