21 Jump Street (2012): In 2005, Schmidt and Jenko are high school students, one an honor roll geek, the other a cool, athletic underachiever. By 2012, they are rookie cops, paired together, on bike patrol yearning to make arrests. After a screw up, they're sent undercover back to high school to find the source of a dangerous synthetic drug. They mix up their names, and Schmidt gets the no-brainer classes where he auditions for Peter Pan and falls in love with Wendy; Jenko gets AP classes where he falls in with high-achieving dweebs. This second chance at high school gives Schmidt delusions of grandeur, which threaten the operation. Can they sort out their relationship as they stumble onto the bad guys? 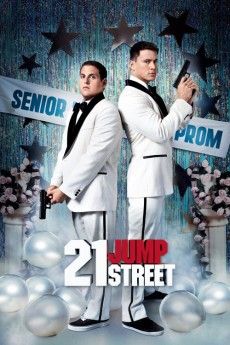 [to a handcuffed Domingo] Jenko: You have the right to... [forgets the Miranda rights] Jenko: ... suck my dick, motherfucker!

Jenko: One particle of unobtainium has a nuclear reaction with the flux capacitor - carry the '2' - changing its atomic isotoner into a radioactive spider. Fuck you, Science!

Captain Dickson: He's white, that means people actually give shit. Schmidt: Um, I would just like to say that I would give a shit if he were black.

Deputy Chief Hardy: We're reviving a canceled undercover police program from the '80s and revamping it for modern times. You see the guys in charge of this stuff lack creativity and are completely out of ideas, so all they do now is recycle shit from the past and expect us all not to notice.

Jenko: Chemistry's the one with the shapes and shit, right?

Jenko: [while passing different cliques] Those are jocks, those are nerds... [passes hipsters] Jenko: I don't know what those are... Schmidt: What the fuck are those things?

[last lines] Captain Dickson: New assignment. Since you two cowboys love to drink booze, smoke weed with kids, and fuck anything with a big ass in jeans with low self-esteem, I'm gonna send you to a place where all that shit is allowed. Jenko: Oh, I love Disneyland! Captain Dickson: You two sons of bitches are going to college! Schmidt: Yes! Jenko: No!

Captain Dickson: I know what you're thinkin': angry, black captain. Well guess what? I'm black, and I worked my ASS off to be the captain. And sometimes, I get a little angry, so suck a dick!

Jenko: [raiding the evidence locker for drugs to take to their party] Got a pound of coke. Schmidt: We are trying to show them a good time, not ruin their fucking lives. Jenko: Pound of marijuana? Schmidt: Best party ever! Jenko: Booyah!

Annie Schmidt: What kind of a sick animal draws an ejaculating penis into a 8-year-old's mouth? Jenko: It's arguably, like, an airplane throwing up. Annie Schmidt: You think I don't know that's a dick and balls? I know all about dick and balls! I partied with Robert Downey Jr. before he got sober, when he was really fucked up and a lot of fun!

Principal Dadier: I am one more black gay kid getting punched in the face away from a nervous breakdown.

Captain Dickson: You are here because you some Justin Bieber, Miley Cyrus lookin' motherfuckers.

Schmidt: [referring to a wall in his parents' house displaying many photos of him as a youth] It looks like I died in a car crash and you never got over me.

Sanders: You punched me because I'm gay? Jenko: What? No, I... oh, come on. I punched him and... he turned out to be gay afterwards.

Jenko: Are you ready for a lifetime of being absolutely badass motherfuckers? Schmidt: Oh, I am. [Scene cuts. They are patroling the park on bicycles] Jenko: I really thought this job would have more car chases and explosions... and less homeless people doodooing everywhere.

Jenko: The three keys of coolness in high school, by Jenko. Schmidt: Mmhmm. Jenko: One, don't try hard at anything. Okay? Two, make fun of people who do try. Three, be handsome. Four, if anyone steps you on the first day of school, you punch them directly in the face. Five, drive a kick-ass car. [walks up to car they'll be driving in, Jenko sees it's an old run down car] Jenko: Shit.

Eric Molson: Get in the fucking car now! Jenko: Not until you ask nicely. Eric Molson: Please get in the car.

Jenko: What are you doing, trying to find my g spot? Just stick it in. GO!

Jenko: Where do we report to? Deputy Chief Hardy: Down on Jump Street. 37 Jump Street... wait, that doesn't sound right.

Captain Dickson: Hey! stop fucking with Korean Jesus! He ain't got time for your problems! He's busy... with Korean shit!

Jenko: You have the right to suck my dick, motherfucker.

Schmidt: Sir, if I have to suck someone's dick... I will but I prefer not to.

Captain Dickson: Who made this? Are you autistic? Schmidt: It IS artistic.

Jr. Jr.: We just shut down our second operation. Meanwhiles you two are fingerpoppin' each others assholes. Schmidt: [mocking Jr. Jr] We ain't finguh-POPpin' each others ace-holes. We're getting shit done.

Eric Molson: You don't care about the environment? That's fucked up, man!

[having sex with Jenko in the end credits] Ms. Griggs: Oh my God! You're like two Hardy Boys in one!

Captain Dickson: Teenage the fuck up!

Schmidt: When did I get stabbed? That's awesome!

Jenko: I would choke the shit out of Glee if I could... if Glee was a person.

Schmidt: We're like, in the end of "Die Hard" right now, only it's our actual life!

Captain Dickson: Are you comfortable? Schmidt: Yes. Captain Dickson: Get your... motherfucking ass up when I'm talking to you! I know what ya'll thinking. Angry black Captain. It ain't nothing but a stupid stereotype. Well let me tell you something, I'm black, and I worked my ass off to become Captain, and sometimes I get angry. So suck a dick!

Schmidt: [after being forced to take HFS, Schmidt and Jenko try to imagine something nasty to make them throw up] Your grandma's vagina and there's a dick going in there. Jenko: What the fuck, dude?

Jenko: [after seeing Schmidt for the first time since high school] Not-So-Slim Shady? What's up, dude?

Tom Hanson: You little dweebs just ruined a five-year investigation. Schmidt: We had no idea. You're, like, an amazing actor, man. Domingo: You played saxophone at my sister's wedding, man. Tom Hanson: Tough titty. I fucked her, too. Domingo: What? Tom Hanson: You little turds. Do you have any idea how difficult it is to infiltrate a gang like this? Do you see this nose? That is a fake nose. Do you want to wear a fake nose on your fuckin' head for, like, months on end? Glue and shit? Schmidt: Worse things in the world. Tom Hanson: We had to get fuckin' tattoos on our dicks, man. Officer Doug Penhall: Yeah, actually, I just said that to mess with you.

Mr. Walters: I need me some Doug McQuaid.

Schmidt: I think I shit my pants.

Eric Molson: You're a cop. You lied to me. Schmidt: I'm sorry, man. Eric Molson: But you bought us Taco Bell.

Mr. Gordon: You'll never know what you can't achieve, until you don't achieve it.

Eric Molson: You made me this friendship bracelet. Jenko: Well he's not really your friend, he was pretending the whole time. Eric Molson: I'm gonna cut this the fuck off later alright!

Tom Hanson: [in disguise, regarding Schmidt and Jenko] If they're cops, I'm DEA.

Mr. Walters: You shot me in the dick. Oh, my god! It definitely came out my asshole. Schmidt, Jenko: Yes. You are under arrest, you have the right to remain silent. Anything you say can and will be used against you in a court of law. You have the right to an attorney. If you cannot afford an attorney, one will be appointed for you. Do you understand these rights as they have been read to you? Fuck you, bitch! Schmidt: Yes, yes, We did it, man. Jenko: God, I feel so good.

[Schmidt and Jenko are flipping their guns in the air, catching them and aiming at each other] Schmidt: Yours isn't loaded, right? Jenko: Huh? Schmidt: We're supposed to unload 'em first, right? Jenko: Nah, that's no fun. Come on.

Schmidt: Is it me?