17 Again (2009): At 17 Mike O'Donnell is on top of the world: he's the star of his high school basketball team, is a shoo-in for a college scholarship, and is dating his soul-mate, Scarlet. But at what's supposed to be his big game where a college scout is checking him out, Scarlet reveals that she's pregnant. Mike decides to leave the game and asks Scarlet to marry him, which she does. During their marriage, Mike can only whine about the life he lost because he married her, so she throws him out. When he also loses his job, he returns to the only place he's happy at, his old high school. While looking at his high school photo, a janitor asks him if he wishes he could be 17 again and he says yes. One night while driving he sees the janitor on a bridge ready to jump, and goes after him. When he returns to his friend Ned's house, where he has been staying, he sees that he is 17 again. He decides to take this opportunity to get the life he lost. 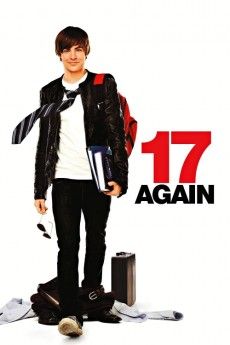 Mike O' Donnell: Scarlet, before you go through this, I want to remind you of September 7th, 1988. It was the first time that I saw you. You were reading Less Than Zero, and you were wearing a Guns 'n' Roses t-shirt. I'd never seen anything so perfect. I remember thinking that I had to have you or I'd die... then you whispered that you loved me at the homecoming dance, and I felt so peaceful... and safe... because I knew that no matter what happened, from that day on, nothing can ever be that bad... because I had you. And then I, uh... I grew up and I lost my way. And I blamed you for my failures. And I know that you think you have to do this today... but I don't want you to. But I guess... if I love you, I should let you move on. [pretending to read a letter to Scarlet in divorce court]

Mike O' Donnell: When you're young everything feels like the end of the world. But it's not; it's just the beginning. You might have to meet a few more jerks, but one day you're gonna meet a boy who treats you the way you deserve to be treated. Like the sun rises and sets with you. [Talking to Maggie on the bleachers]

Stan: [Mike tries to stand up to Stan's bullying for Alex] Give me my ball back bitch. Mike O' Donnell: You know Stan I feel sorry for you. Stan: You don't know me. Mike O' Donnell: Oh, but I do all too well. You're the man. Captain of the basketball team, dates the pretty girls, high school is your kingdom. But people, Stan is a bully. Why? It'd be way too easy to say Stan preys on the weak simply because he's a dick. No... no... Stan here is much more complex than that. See, according to leading psychiatrists, Stan is a bully for one of three reasons... Mike O' Donnell: [while playing with Stan's basketball] One... underneath all that male bravado, there's an insecure little girl banging on the closet door trying to get out. Two... like a caveman, Stan's brain is underdeveloped. Therefore, Stan is unable to use self-control. And so he acts out aggressively. Three... Stan has a small wiener. Don't hurt yourself, big boy.

[from trailer] Ned Freedman: What are you eating? Mike O' Donnell: I don't even know, all I know is that I'm hungry... [squrits Cheez-Whiz into his mouth] Mike O' Donnell: ... *all* the time.

Mike O' Donnell: [after being transformed] Come on, man! Don't you ever wanna go back and do high school again? Ned Freedman: No. I'm rich and no one has shoved my head in a toilet today!

Ned Freedman: I think our hands just made a baby.

Alex O'Donnell: [after watching Mike dance with Scarlet] Do you dance with all your friends' moms? Mike O' Donnell: [Walking away casually] Pretty much...

Ned Freedman: It's a classic transformation story. Are you now or have you ever been a Norse God, Vampire, or Time Traveling Cyborg? Mike O' Donnell: I have know you since what, first grade? I think that maybe I would have told you! Ned Freedman: Vampire wouldn't tell, Cyborg wouldn't know.

Stan: [after Mike's speech about abstinence and making love, the girls put the free condoms back in the basket] I don't need this. Stan: [grabs a bunch of condoms from the basket] Great, fine. more for me, i got enough for the whole weekend.

Mike O' Donnell: If this were Afganistan, you would be pulled backwards through the streets by mountain goats with your hands cut off... just saying. [talking to Naomi about getting Alex mom a new man in front of him]

Ned Freedman: Soooo, what did we learn in school today? Mike O' Donnell: That I'm a bad dad.

Janitor: [Mike is staring at his old basketball team picture] Mike O'Donell! Mike O'Donnell: Do I know you? Janitor: No, but I know you. Mike O'Donnell: Oh, yeah? Janitor: High school star, never quite lived up to your potential. Sooner or later you all come back to your old school, stand there and look at the picture of the glory days wondering "What might have been." Seems to me you guys are living in the past. Mike O'Donnell: Well, of course I wanna live in the past. It was better there... Janitor: I bet you wish you could do it all over again? Mike O'Donnell: You got that right.

Mrs. Dell: Okay, today we will be continuing our discussion with human sexuality and us we discussed the official school policy "abstinence". Mike O' Donnell: Now that is very sensible! I'm glad some here has there head screwed on straight! I think all of us should make a pact to abstain from sex! now who's with me? You guys come on. [the whole class laughs] Mike O' Donnell: Maggie?

Scarlett O'Donnell: Wait, I need to smell him...

Principal Jane Masterson: Are you peacocking?

Maggie O'Donnell: Why is the new guy waving at me? Samantha: I don't know, but if he were an apple he would be a delicious.

Mike O' Donnell: There's no path, Ned! There's no path. I can't do it! I just made it worse for them. My wife is happier, everyone's happier with me out of the picture, Ned. It's time to move on...

Maggie O'Donnell: Oh I get it. You want to play games. Okay, I'll be the hungry lioness and you can be the baby gazelle!

Ned Freedman: We have to go shopping, your shirt is bedazzled. Mike O' Donnell: Bedazzled with rhinestones!

Mike O' Donnell: Why are you burping? Alex O'Donnell: What? I have tummy issues. Get over it!

Ned Freedman: Okay, that's not safe or sanitary. That's your can now. We'll label it like that.