16 Blocks (2006): Jack Mosley, a burnt-out detective, is assigned the unenviable task of transporting a fast-talking convict from jail to a courthouse 16 blocks away. However, along the way he learns that the man is supposed to testify against Mosley's colleagues, and the entire NYPD wants him dead. Mosley must choose between loyalty to his colleagues and protecting the witness, and never has such a short distance seemed so long... 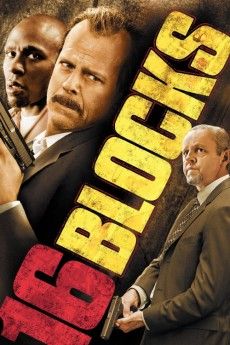 Eddie Bunker: You're driving in a hurricane and you see three people at a bus stop. One is an old lady and she's sick. One is your best friend and he saved your life. And the third is the lady of your dreams. Now check it out, you only have room for one in your car, which one do you take?

Jack Mosley: [as an answer to Eddie Bunker's riddle] You give your car keys to your best friend, who takes your car and drives the old lady to a hospital. You stay behind with the love of your life.

Frank Nugent: [after catching Jack and telling him to drop his weapon] Can't get lucky all the time. Eddie Bunker: [sneaking up behind Frank with a gun] You can be smart every day, though.

Jack Mosley: You're not gonna die on me, are you? Eddie Bunker: I dunno, I ain't never died before.

[Jack gets out of the car and walks into a liquor store] Eddie Bunker: Yo, it ain't Miller time, man!

Jack Mosley: Oh yea, you give the car keys to your best friend and you let him take the old lady to the hospital. You stay at the bus stop with the girl because she's the girl of your dreams, right? So everything is going to be ok.

Jack Mosley: You're a sunny little shit, I'll give you that much.

Frank Nugent: [Reloading weapon] You know, when I woke up this morning, I didn't expect to be trading nine millies with my friend.

Frank Nugent: [after the shootout in Chinatown, Nugent is talking to Mosley through the door] You still there, Jack? Jack Mosley: Yeah, I'm still here.

[first lines] Jack Mosley: [tape recording] It's Detective Jack Mosley, Shield number 227. I guess this will be my last will and testament. This is for Diane. When this day is over, they're gonna come and talk to you about this and they're gonna... gonna tell you what happened, Diane. But what they tell you is not really what happened here. So I hope that you get this. I was trying to do a good thing.

Frank Nugent: [on a botched hit on Eddie] That's what we get for hiring drug addicts