Sharpe Sharpe's Waterloo (1997): Based on the novel by Bernard Cornwell, "Sharpe's Waterloo" brings maverick British officer Lt. Col. Richard Sharpe to his last fight against the French, in June of 1815. Sharpe is assigned to the Prince of Orange's staff, and is rejoined with Sgt. Harper (retired) and riflemen Hagman and Harris at the famous battles of Quatre Bras and Waterloo. Not only must Sharpe deal with incompetent orders from the Prince of Orange, that lead to slaughter, he confronts his wife's lover, Lord Rossendale, in the midst of battle. The film climaxes as Wellington's small army 'holds the line' against Napolean's veteran Imperial Guard. —Derek Relf 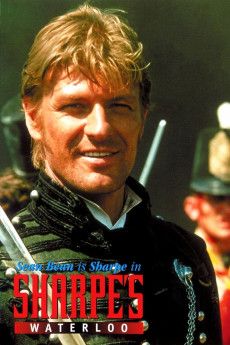 Richard Sharpe: [Rallying the South Essex] I'm your colours. I Am.

Wellington: The Prince of Orange. They wanted to give him command over me. Better counsel prevailed.

Prince William of Orange: It's the French. Oh my god. Now they have guns. Wellington: Oh, they've always had guns, your royal highness. What they haven't always had is you as a target.

Doggett: [to the Prince of Orange] You, sir, are a silk stocking full of shit.

Doggett: [on the Prince of Orange] He did it again. How many more men will he kill? That's my commission gone to the blazes I dare say, but it had to be said. Richard Sharpe: [choking with grief] Daniel Hagman... Harris... He won't kill anymore! Patrick Harper: [to Doggett] Oh now you have caused trouble! [rides after Sharpe]

Doggett: [to the Prince of Orange] You did it again! Colonel Sharpe said you would do it again, and you did! All those men dead because you wanted to get out? You coward! Rebeque: Doggett! His Royal Highness cannot be called a coward. Doggett: No, dammnit. No, not cowardice, not that. Just so he can dance and prance, and make high cockalorum, while men die? Horribly? It is too much, I declare, too much! I shall say it! Doggett: [after a second] You sir, are a silk stocking full of shit!

Richard Sharpe: What do you want? Paulette: More pay would be nice.

Harper: Do you still want to see Boney? Sharpe: More than ever.Might ask him for a job.

Wellington: [to the retreating Dutch troops] My lads, you look blown from your run. Come, do take breath a moment. Then we will go back and try if we can do better. Take heart, soon have some guns up. Uxbridge! Uxbridge: Wellington? Wellington: When? Uxbridge: Oh, they do come, I assure you. What of the Prussians. Any word at all? Wellington: I told the Prussians we'll support them but only if not attacked here. They'll have to fight without us today.

Wellington: If your corps is coming up, as you assure me, how close do you think they are? I want them to clear that road, I want it handsomely arranged with guns. Uxbridge: Very close. Wellington: How close? Uxbridge: Close. Coming up. [He turns around to look for them]

[as the French advance on La Haye Sainte, beating their drums and shouting "Vive L'Empereur!"] Patrick Harper: In all the years that I've been fighting the French... I have become sick and bloody tired of that shite music that they play.

Hagman: [singing, tongue-in-cheek] Old Wellington, he scratched his bum, says, 'Boney lad, thee's had thee fun'. My riflemen will win the day, over the hills and far away!

Doggett: [to Sharpe, after the Prince of Orange has foolishly given the order to charge] Have you ever ridden in a cavalry charge before, sir? Richard Sharpe: Just stay on your horse, Tom, and try *not* to chop its bloody ears off!

Patrick Harper: [handing a plate of cooked beef to Sharpe] Eat! It's French. - It's good! - Though I am a bit of a cannibal, so I am!

Wellington: [after Sharpe and his men repulsed the French troops and forced them to retreat] Sharpe! Richard Sharpe: Your Grace! Wellington: What are you waiting for? Forward, and complete your victory! Don't let them stand, see them off our land! - Your battalion, Mr. Sharpe!

Macduff: [after Sharpe saved his life in battle] I don't know who you are, but Thank You!

Patrick Harper: [giving Sharpe a 'first hand' report] I heard that straight from the horse's mouth! A gallopper of the 'Roast and Boiled', who'd heard it first hand from a 'Wallopping Mick' of the 'Six Skins', who saw them Prussians with his own eyes, so he did!

Richard Sharpe: [to Harper] Have not chalked my name on the door, I see. Could you not bring yourself to do it? What would it say? Lt. Col. Sharpe, arse-wiper to the Prince of Orange? [afterwards, regarding Bonaparte] Richard Sharpe: Might as well ask him for a job!

Doggett: [as Sharpe comes storming out of the Prince of Orange's headquarters] You're hurrying, sir? Richard Sharpe: I am, Tom! I could not stay in there another minute without I hit him... What do you do with Silly Billy? Doggett: I'm a serious officer, sir, and I want to learn all I can... Richard Sharpe: Well, you won't learn anything from him. He's not worth his silk stocking full of shit! Doggett: [later, after another blunder, to the Prince of Orange's face] Sharpe was right... You, sir, are a silk stocking full of shit!

Rebeque: [Rebeque is talking to Sharpe about the Prince of Orange and his whores, when there is large bang] That's his boots!

Dutch Captain: [speaking in Dutch to his men] No! No! You can shoot better than that!

Rossendale: [in the thick of a massacre] I can kill as well as you Sharpe!

[as the French artillery commence fire, beginning the Battle of Waterloo] Uxbridge: [lifting a glass of sherry] Gentlemen, I give you today's fox.

Wellington: [after Sharpe told him that Napoleon has tricked Wellington with a ruse] Humbugged? - Humbugged!... Humbuggery!