Per qualche dollaro in più (1965): Drifting from town to town, the poncho-clad Man with No Name and the lightning-fast right hand rides into the town of El Paso, in search of the maniacal escaped convict, El Indio. It's been eighteen short months since the deadly confrontation in Per un pugno di dollari (1964), and this time, the solitary stranger, now a professional bounty hunter, will have to go against his beliefs and do the unthinkable: join forces with the hawk-eyed marksman, Colonel Douglas Mortimer, to collect the hefty reward. Now, as El Indio and his cut-throats have already set their sights on robbing the crammed-with-cash Bank of El Paso, the stage is set for a bloody showdown at high noon, against the backdrop of silent double-crosses and fragile allegiances. But, is it worth dicing with death for a few dollars more? —Nick Riganas 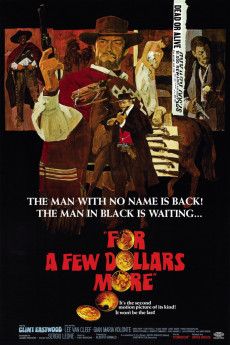 [first title card] Title card: Where life had no value, death, sometimes, had its price. That is why the bounty killers appeared.

[last lines] Monco: [counting reward sums of outlaws he just killed] Ten thousand... twelve thousand... fifteen... sixteen... seventeen... twenty-two. Twenty-two? [a wounded Groggy comes from behind and raises his gun; Monco whirls and shoots him dead] Monco: ...Twenty-seven. Col. Douglas Mortimer: Any trouble, boy? Monco: No, old man. Thought I was having trouble with my adding. It's all right now.

Monco: Alive or dead? It's your choice.

'Baby' Red Cavanaugh: I didn't hear what the bet was. Monco: Your life.

Cuccillo: [Looking at dead body] Who did it? El Indio: Why don't you look at the knife? Cuccillo: [short pause] It's mine. El Indio: And it shouldn't be there, should it?

El Indio: When the chimes end, pick up your gun. Try and shoot me, Colonel. Just try.

[Mortimer has just recovered the watch from Indio, which contains a picture of the woman that Indio raped] Monco: [peers at the picture] There seems to be a family resemblance. [He hands Mortimer the similar watch with the same picture he had taken earlier] Monco: Here. Col. Douglas Mortimer: [pause, then] Naturally, between brother and sister.

Sherrif of White Rocks: [Hands Monco the reward money for Red Cavanaugh] Two thousand dollars. It's a lot of money. Takes me three years to earn it! Monco: Tell me, isn't the sheriff supposed to be courageous, loyal, and above all, honest? Sherrif of White Rocks: Yeah. That he is. Monco: [Pulls off his sheriff's star and walks out] I think you people need a new sheriff.

Monco: [to Mortimer, referring to the watch he took from Mortimer without his knowing] Very careless of you, old man.

Fernando: [Points] That's the bank! As soon as I get some money, I'll put it in. Monco: But you're gonna have to earn it first.

Monco: [Examining Mortimer's gun] How can somebody in my business go around with a contraption like this? Col. Douglas Mortimer: That contraption almost sent you to your grave.

Col. Douglas Mortimer: One from the outside one from the inside. There's no other way.One of us will have to join Indio's gang. Monco: Why did you look at me when you said one of us? Col. Douglas Mortimer: Because they don't know you. Wild sees me and his hump will catch on fire. Monco: Tell me Colonel... how do you propose that I join up with Indio? Maybe bring him a bunch of roses?

Monco: Which way we headed? El Indio: North. Monco: North? Along Rio Bravo Canyon? El Indio: Why not? Monco: Seems like a pretty good place for an ambush to me. El Indio: You know a better way to go? Monco: Yeah, south. El Indio: Hm... ride to the border?

Groggy: Indio calls and Groggy comes running. El Indio: And Sancho? Groggy: If you're waiting for Sancho I'll come back in another four years. He's in prison. No amore, no dinero, no sun.

Santa Cruz telegraphist: Mister I didn't hear any shots at the bank.I sure would have. Monco: [points gun at him] You might hear one.The alarm.

Monco: Tell me, isn't the Sheriff supposed to be courageous, loyal, and above all honest? Sherrif of White Rocks: Yeah, that he is. Monco: [grabs his badge and walks outside] I think you people need a new Sheriff. [leaves the badge and rides off]

[after Mortimer opens safe, Indio declares a cooling off time for the loot] El Indio: [to Mortimer] And you will wait a month to get your share. Col. Douglas Mortimer: Naturally! I'll be in the tavern.

Tomaso: [as his family are led away] They're both innocent, I was the one you know that. El Indio: [two shots ring out] I know. I'm sure you hate me just enough.

Nino: Slim. A change of plan. [he beckons Slim over] Slim, member of Indio's gang: What is it Nino? Nino: Indio wants you to... [he stabs Slim and releases the prisoners] Nino: Here are your guns without bullets. And listen don't let Indio find you both around.

Old Prophet: I don't know him, I don't know him, I don't know him! Monco: Come on now, you know everybody. Old Prophet: Don't know anybody anymore! I'm dead! Understand? [Lifts his head from under the covers] Old Prophet: Well, there was a time when I knew everybody. That was a long time ago, when all this was prairie. But lately everybody's in a hurry, with your damned good-for-nothing trains! [Mocks a train's wheels moving] Old Prophet: Toot toot toot *tweet*! [Spits] Old Prophet: Disgusting! [Looks back at Monco] Old Prophet: One day someone from the railroad comes here to see me and he says, 'Prophet, the railway's gonna go right past your house.' 'Oh, is that so?' I said. 'Mm-hm, yup that's right he says, 'All those trains gonna go right past here, and the best thing for you, Prophet, is to sell your land to the company or else we'll buy Baker's. He lives next to your place, and I'll put the tracks there, and that'll make you go crazy. What do you say, will you sell out to our company, Prophet?' "Oh, is that so?' says I. [Grins and chuckles] Old Prophet: He was *very* anxious for me to sell out. You know what I told him about the railroad? You know what I told him he could do with his railroad? [pulls his blankets over his head and laughs crazily as a train shoots by] Old Prophet: [after the train passes] You know what my decision about selling was? Monco: Well, you said no. Old Prophet: You're right about that! No to him and his damn trains! I wouldn't, no! Monco: [Finally has had enough] Look, listen to me, old man! You're supposed to be a prophet, and I didn't come here to listen to you rattle on about trains! I want to find out about this man, it's obvious you don't know anything. Old Prophet: [Angry] No need to be insulting! If that's all you came here to do, you can clear out of my house fast, before I lose my temper, understand? [Monco shrugs and gets up to the door] Old Prophet: *Say*! Where you going, hm? Monco: [Turns around and smirks] I guess I better leave before you go and lose your temper!

El Indio: [Talking about Agua Caliente] Yes, I have many friends here. It looks just like a morgue. But look out. It could be one so easily. [Looks at Groggy] El Indio: They don't like strangers, huh? Groggy: No. They don't like anybody!

Col. Douglas Mortimer: [meeting up with Monco to get the stolen loot] I was worried about you - all alone, with so many problems to solve...

Monco: Why this hotel and not some other? Fernando: You probably wouldn't that other place as much, senor. At that place you'd stay up half the night shooting cockroaches. At this hotel, the rooms will cost you so much less. And there's a landlady at this one, senor! Monco: Married? Fernando: Yes, but she doesn't care!

Monco: You mind telling me how you got here? Col. Douglas Mortimer: I just reasoned it out. I figured you'd tell Indio to do just exactly the opposite of what we agreed, and he's suspicious enough to figure out something else. Since El Paso was out of the question, well, here I am!

El Indio: [to prison guard he hasn't killed] I'm letting you live, hero. That way you can tell everyone what takes place here.

El Paso Bank Manager: To try robbing us would be so futile that only a complete fool would attempt it. Col. Douglas Mortimer: Yeah. Or a complete madman.

Sancho Perez, Member of Indio's Gang: Amigo, why did you help me out? Monco: Well that's such an high reward offered on all you gentlemen. That I thought I might just tag along on your next robbery. Might just turn you into the law.

Col. Douglas Mortimer: Leave Indio to me. Monco: All right.

El Indio: It's easy enough to steal. The trouble is in keeping the loot.