Camp (2003): Misfits in their lives back home, a group of young people live it up at musical-theater camp. While the sports counselor is completely ignored, the kids' spend all their time in rehearsal for a grueling schedule that involves a new show every two weeks. Several personal stories come to the fore. Is talented golden-boy Vlad honest in his feelings about Ellen? Can cross-dressing Michael have a relationship with his parents? Will one-hit-wonder musical playwrite and now camp counselor Bert Hanley remain mired in drink and cynicism? Fireworks are in store when Fritzi, who slavishly serves glamour girl Jill, is finally told to get a life, and the parents of Jenna, whose jaw has been wired shut in a compromise to avoid being sent to "fat camp", learn a valuable lesson at the summer's big end-of-season benefit. —Martin Lewison 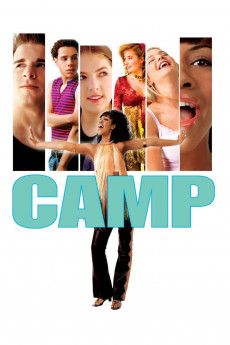 Bert: I'm gonna call it off. Glen: I think you'd better. Fritzi: Wait! Bert: Fritzi, what in the hell are you doing here? Fritzi: Well I... I knew you'd be discussing stopping the show and I just thought how disappointed all the kids would be after... Bert: You scheming little bitch! Fritzi: Oh please! I'm a child. Bert: If you think for one... Fritzi: Oh save the speech, rummy. She's fucked, I'm ready, and the goddamn show must go on. So let's get cracking, shall we?

Jill: Are you new? Fritzi: No, I was here last year. Don't you remember me? [on her negative] Fritzi: We were in 'Night, Mother together.

Vlad: Have you ever experimented with heterosexuality? Michael: What? You mean sleep with a straight guy? What for?

Michael: I can't even straighten my hair!

Director: Now, do it again. And try not to screw up the blocking this time, eyes, eyes, nostrils, silent scream! Jenna: I have to go to the bathroom. Director: Piss in the dumpster! Again!

Bert: [addressing Fritzi] I've been watching you and you are a scary little girl. There's nothin' you can't do if you put your mind to it.

Bert: [addressing Glen] But I'll tell you something. They're a bunch of little freaks. And the more normal we try to make them, the more lonely and isolated they're gonna feel.

Vlad: Are you blushing? Michael: Are you kidding? I'm doing everything but bat my eyes!

Michael: [after Vlad kisses his girlfriend, Julie] I give up!

Ellen: Thirty foot rule? Spitzer: What's that? Ellen: Means Michael has to stay thirty feet away from him until we find out if he's straight or gay.

Jill: Don't worry. You're only a few pounds heavier then Ellen. Spitzer: I think I've met your sister, Cinderella.

Spitzer: My junior prom I stayed home with a roll of cookie dough and TV-Land. Shaun: I watched my junior prom from outside in the bushes for three hours. Spitzer: Oh, that's so Stella Dallas!

[first lines] [scene opens on Dee, Shaun and Company singing "How Shall I See You Through My Tears"] [as singing continues, scene shifts to Vlad in his bedroom] Vlad: To all the critics out there, I know they're gonna review this, and I know they're gonna try to knock me - is it OK if I say this to the camera, Amber? - Okay. I only am who I am 'cause I was born that way. I have a gift, and I'm trying not to be selfish about it, but to use it. Okay? If you're gonna knock me for that, that's your problem. Jealousy will get you nowhere. And I'm gonna keep rockin' on. [scene returns to singing cast, then shifts to Ellen's bathroom] Ellen's Brother: Ellen, what's the matter with you? Don't tell Mom I'm taking you to your stupid junior prom. Ellen: [in shower] Get out of here! Ellen's Brother: Your brother - how gross is that! Come on! Ellen: They don't know you're my brother. Please Ben you have to - I'll pay you. Ellen's Brother: Find someone who's not related to you. Loser. [scene shifts to Michael, in drag, attempting to enter his prom - the teacher rips up his ticket and he's beaten up by fellow students - Michael dreams himself back to the cast singing "How Shall I See You Through My Tears"]

[last lines] Vlad: Well, now that camp's over - almost over - and we live kind of close to each other I was hoping that... we can go out sometime. Michael: I *know* you're not asking girlfriend out for a date after all this. Vlad: If she'll forgive me. Michael: This boy not only has cajones, but he's got burritos and huevos rancheros too. Ellen: [to Vlad] Okay. Michael: What? Vlad: Really? Ellen: I'll go out with you. Michael: Ellen, you're like some Jenny Jones guest! Ellen: Michael, eventually I have to start hanging out with boys who don't wear dresses. I thought we came here to go swimming. [to Vlad] Ellen: You coming in? Vlad: It's pretty cold. Ellen: I'll take my chances. Vlad: ...Okay. [they jump in lake] Ellen: It's not that cold. Vlad: It's freezing. Ellen: Don't be a girl - leave that to Michael. [Michael jumps in lake] Michael: You two are like a bad car wreck - I wash my hands of the both of you. Ellen: Oh yeah? Michael: Oh it's cold! Quit splashing! [scene shifts to the cast singing "The Want of a Nail"]

Vlad: I'm an asshole! And I don't know... I just love attention. I'm an attention junkie I guess. Awww... Why do I do shit like that?

Vlad: [sitting on Michael, jokingly] So, do you forgive me? Michael: If I forgive you, will you get off of me? Vlad: Sure. Michael: Then, no.

[walking on the porch as the kids watch Vlad sing one of his songs] Bert: If I can teach you one thing, which is supposed to be my job here, it'd be that you should all go home. Michael Bennett's dead. Bob Fosse is dead. Times Square is a theme park now. I hate to be the Grinch, but it's not normal what goes on up here. Somebody has got to warn you. Teenage faghags become adult faghags. Straight boys are straight. You can't turn 'em just because you need to be loved. The foundation that's being laid here is not going to help you in the real world. It's going to lead to waitressing jobs and bitterness and the obsessive, pointless collecting of out-of-print original cast albums.

[at a drag birthday party for Michael] Shaun: The only thing l have to say is, the hair on my legs better grow back, or else somebody's getting sued. Michael: You did not! Shaun: [musically] God shave the Ka-weeeeeeen!