300: Rise of an Empire (2014): After its victory over Leonidas' 300, the Persian Army under the command of Xerxes marches towards the major Greek city-states. The Democratic city of Athens, first on the path of Xerxes' army, bases its strength on its fleet, led by admiral Themistocles. Themistocles is forced to an unwilling alliance with the traditional rival of Athens, oligarchic Sparta whose might lies with its superior infantry troops. But Xerxes still reigns supreme in numbers over sea and land. 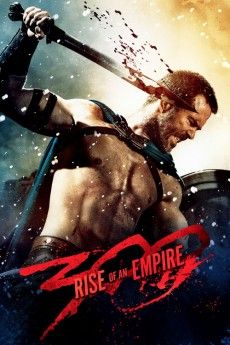 [from trailer] Themistocles: Better we show them, we chose to die on our feet, rather than live on our knees!

Artemisia: You fight much harder than you fuck.

Artemisia: Do not forget who put the crown on your childish head! My king. Now sit on your golden throne and watch this battle from the safety I provide you.

Queen Gorgo: It begins as a whisper. A promise. The lightest of breezes dances through the rigging as it creaks above the death cries of 10,000 men. It moves through her hair as gently as a lover's hand. That breeze, that promise, became a wind, a wind that is blown across Greece carrying a message told again and again of our Lady Freedom and how wise she was to charge Leonidas to lay all at her feet. A wind, my brothers, of sacrifice. A wind of freedom. A wind of justice. A wind of vengeance.

Themistocles: My brothers. Steady your heart. Look deep into your souls. For your mettle is to be tested this day. If in the heat of battle you need a reason to fight on, you need only to look at the man who fights at your side. This is the why of battle. This is the brotherhood of men in arms. An unbreakable bond made stronger by the crucible of combat. You will never be closer than with those who you shed your blood with. For there is no nobler cause than to fight for those who will lay down their life for you. So you fight strong today. You fight for your brothers. Fight for your families. Most of all you fight for Greece.

Artemisia: Today we will dance across the backs of dead Greeks!

Themistocles: [at sword-point standoff with Artemisia] I would rather die free than live as a slave. [pause] Themistocles: Even if I was attached to you by chain.

[First Lines] Queen Gorgo: The Oracle's words stand as a warning. A prophecy. Sparta will fall. All of Greece will fall. And Persian fire will reduce Athens to cinder. For Athens is a pile of stone and wood and cloth and dust. And, as dust, will vanish into the wind. Only the Athenians themselves exist, and the fate of the world hangs on their every syllable. Only the Athenians exist and only stout wooden ships can save them. Wooden ships, and a tidal wave of heroes' blood.

[from trailer] Artemisia: Steel and flesh... life and death... war.

[from trailer] Queen Gorgo: Leonidas is dead... Themistocles: Then... avenge him!

Artemisia: I am Greek by birth, and I have Greek blood running through my veins. But my heart is Persian.

[from trailer] Artemisia: I will attack the Greeks with my entire navy!

[about Xerxes Messenger Visiting Sparta] Queen Gorgo: No terms were reached. Xerxes' messenger was... Well, he was rude and he lacked respect. He didn't understand the same threats made in Thebes and Athens would not work here. This is the birthplace of the world's greatest warriors. Men whose king would stand and fight and die for any one of them. Xerxes' messenger... did not understand this is no typical Greek city-state. This is Sparta. Themistocles: It was clear to the messenger there'd be no Spartan submission? Queen Gorgo: It was clear.

Artemisia: It's a curious thing for a simple ship guard... to not lower his eyes when questioned by me. That could've been just a lack of discipline. [Grabs His Hands] Artemisia: But a man's hands do not lie. They can reveal every imperfection and flaw in his character. You see, your hands are not rough enough to work the rigging of this ship. I know every single man beneath my lash. Can you explain to me how I don't know you? Scyllias: Forgive me, Commander. Let me introduce myself. [He bows, Unsheathes a Knife and Kills Two Soldiers]

[from trailer] Xerxes: Nothing will stop the march of my empire!