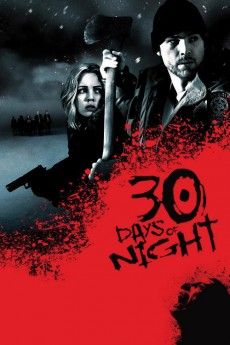 Sheriff Eben Oleson: Hell of a day. The Stranger: Just you wait.

Kirsten Toomey: [crying] Please, God... Marlow: [speaking in vampire language] God? [Marlow looks around, and then after a long pause he stares into Kirsten's eyes] Marlow: [coldly, in English] No god.

Marlow: [speaking in vampire language] When man meets a force he can't destroy, he destroys himself. What a plague you are.

[after tearing into someone's throat] Little Girl Vampire: I'm done playing with this one. You want to play with me now?

The Stranger: No way out of town. No one coming to help. Jake Oleson: Shut up. Helen Munson: Ignore him, Jake. The Stranger: You can feel it. That cold ain't the weather. That's death approaching. Who do you think they're gonna take first? The girl, who thinks a gun will help her? The kid, sheriff's kid? Or the old gal? Jake Oleson: Shut up! [Jake throws a board game piece at the Stranger] The Stranger: Oh... yeah... thank you, for the plastique. I can snap that apart and pick the lock.

Marlow: [speaking in vampire language] There is no escape. No hope. Only hunger and pain.

Marlow: [speaking in vampire language] That which can be broken must be broken.

Sheriff Eben Oleson: They're burning down the town. Denise: Nobody will know what happened. They'll just think it was some horrible accident. Lucy Ikos: Next time they'll take out Point Hope, Wainwright.

Marlow: [Sees Eben walking towards him] Shukanu ja'miph! [the One who fights!]

Stella Oleson: I should have fought harder, kept Wilson here. Sheriff Eben Oleson: It's hard to stop someone when their family's at stake. The things you'll do to save your own. Stella Oleson: We were like that once... weren't we?

The Stranger: Mr. and Mrs. Sheriff. So sweet. So helpless against what is coming. Stella Oleson: He's just trying to freak us out. Jake Oleson: It's working. Sheriff Eben Oleson: We have more important things to think about. I'll check on Gus. The Stranger: Check on Gus. Board the windows. Try to hide. They're coming. This time they're gonna take me with them... honor me. Yeah. For all that I have done. Sheriff Eben Oleson: They? Who are they?

Deputy Billy Kitka: You know, Beau's not so bad. Why'd you bother writing him up? Sheriff Eben Oleson: He lives all alone out there on the south ridge. A little citation now and then lets him know he's a part of this town.

Jake Oleson: I saw them feeding on Grandma Helen. They're like, vampires, you know? Stella Oleson: Vampires don't exist, Jake.

Marlow: [speaking in vampire language] We should have come here ages ago.

Doug Hertz: They don't fall down when they're shot. Beau Brower: Hell, neither do I.

Beau Brower: Welcome to Barrow. Top of the world.

Marlow: [speaking in vampire language] The heads must be separated from their bodies. Do not turn them.

Lucy Ikos: Now there's six of us. Carter Davies: Soon there'll be just five. [Carter removes his hood to reveal that he has turned into a vampire] Carter Davies: The little girl in the store. I changed. I'm just so thirsty now. I couldn't tell you. That photo's all I've got left of my family. Martha was taking the kids to visit her mom. They were hit... by a drunk driver. I wanted to be with them so much. I... I couldn't bring myself to do it. But I know they're waiting for me. I can't live forever. I can't. Eben. Don't let me.

Deputy Billy Kitka: [talking about his family] I heard the screams. I didn't want them to die like the rest. I tried to shoot myself too. The fucking gun jammed. I shouldn't have signaled to you. I just couldn't stand being on my own.

Marlow: [Under his breath as Eben approaches] Come and see.

[after getting shot in the arm by Eben] The Stranger: You shithead.

Beau Brower: [before lighting a box of flares on fire] You ain't gonna eat me!

Sheriff Eben Oleson: I can smell your blood.

Sheriff Eben Oleson: Yeah, it worked. But they're gonna cut off the power, so... [the power suddenly goes out]

Adam Colletta: Are you sure you don't want to stay? Me and Jeannie were kind of hoping that you and Eben might re-think this seperation thing. Stella Oleson: Thanks. I uh... got to make the plane.

Deputy Billy Kitka: [after Stella misses her plane] Peggy and me can put two girls in one room. You'd have a place of your own. Stella Oleson: I can't stay here. I've got bills to put in the mail. My plants will die. Deputy Billy Kitka: It'll all work out. Of course, the price of staying at my place is explaining to me and Peggy just what the heck is wrong with you and Eben. Stella Oleson: [muttering to herself] Not enough time this century to cover that, Billy.

Sheriff Eben Oleson: [upon seeing pictures of Carter's family] Can't your wife bring you up a sweater or two? Or bring the whole tribe up while she's at it? Carter Davies: They'll come when they're ready, I guess.

[upon finding a bag of pot at the sheriff's station] Sheriff Eben Oleson: What the hell is that? Jake Oleson: It's pot. It helps her with her cancer. Helen Munson: Didn't tell you I got a little greenhouse at home. Didn't want you arresting me. Sheriff Eben Oleson: Now I know why you wanted to go live with grandma.

Doug Hertz: You keep shooting and they just... they just keep coming. Carter Davies: How's that possible? Doug Hertz: I don't know. Maybe they're all coked up on PCP or something, you know? They don't feel any bullets.

Sheriff Eben Oleson: We'll sleep in shifts. We'll ration our food, and then we'll figure out the next step. We have two advantages - we know this town, and we know the cold. We live here for a reason: because nobody else can.

Denise: Neither of you are getting me alone. Neither! Aaron: Ah! We share, right? None of us have to be greedy. Gabe: Yeah, come on. We'll be good. Aaron: Oh, you will? Where's the fun in that? Gabe: Oh, you bad little bitch.