20,000 Days on Earth (2014): Drama and reality combine in a fictitious 24 hours in the life of musician and international cultural icon Nick Cave. With startlingly frank insights and an intimate portrayal of the artistic process, the film examines what makes us who we are, and celebrates the transformative power of the creative spirit. 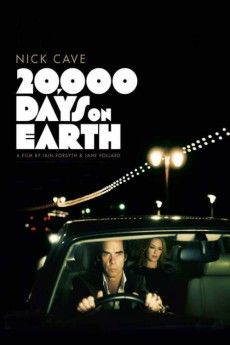 Nick Cave: To act on a bad idea is better than to not act at all, because the worth of the idea never becomes apparent until you do it.

Nick Cave: All of our days are numbered. We can not afford to be idle. To act on a bad idea is better than to not act at all because the worth of the idea never becomes apparent until you do it. Sometimes this idea can be the smallest thing in the world; a little flame that you hunch over and cup with your hand and pray will not be extinguished by all the storm that howls about it. If you can hold on to that flame, great things can be constructed around it; things that are massive and powerful and world changing. All held up by the tiniest of ideas.

Nick Cave: The first time I saw Susie was at the Victoria & Albert Museum in London and when she came walking in, all the things I had obsessed over for all the years - pictures of movies stars, Jenny Agutter in the billabong, Anita Ekberg in the fountain, Ali MacGraw in her black tights, images from the TV when I was a kid, Barbara Eden and Elizabeth Montgomery and Abigail, Miss World competitions, Marilyn Monroe and Jennifer Jones and Bo Derek and Angie Dickinson as Police Woman, Maria Falconetti and Suzi Quatro, Bolshoi ballerinas and Russian gymnasts, Wonder Woman and Barbarella and supermodels and Page 3 girls, all the endless, impossible fantasies, the young girls at the Wangaratta pool lying on the hot concrete, Courbet's Origin Of The World, Bataille's bowl of milk, Jean Simmons' nose ring, all the stuff I had heard and seen and read. Advertising and TV commercials, billboards and fashion spreads and Playmate of the Month, Caroline Jones dying in Elvis's arms, Jackie O in mourning, Tinker Bell trapped in the drawer, all the continuing, never-ending drip feed of erotic data came together at that moment in one great big crash bang and I was lost to her and that was that.

Nick Cave: My biggest fear is losing memory because memory is what we are. Your very soul and your very reason to be alive is tied up in memory.

Nick Cave: In the end, I am not interested in that which I fully understand.

Nick Cave: In the end, I'm not interested in that which I fully understand. The words I have written over the years are just a veneer. There are truths that lie beneath the surface of the words... truths that rise up without warning, like the humps of a sea monster and then disappear. What performance and song is to me is finding a way to tempt the monster to the surface, to create a space, where the creature can break through what is real and what is known to us. This shimmering space, where imagination and reality intersect... this is where all love and tears and joy exist. This is the place. This is where we live.