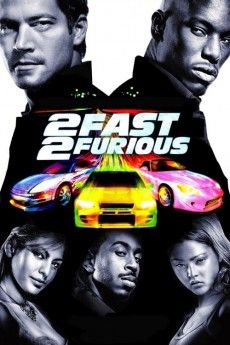 Brian O'Connor: So, Dunn, looks like we're gonna be partners, bro. Could you tell me right quick what would be a better motor for my Skyline, a Gallo 12 or a Gallo 24? Agent Dunn: Um... [clears throat] Agent Dunn: 24? Brian O'Connor: I didn't know pizza places made motors.

Monica: You might wanna keep your eyes on the road, playboy.

Brian O'Connor: You ready for this? Roman: Come on, man. Guns, murderers and crooked cops? I was made for this, bro.

Tej: Whoa, fellas, fellas. I know my tags are outta date, but damn.

[Brian turns his car around and drives backwards down the highway] Roman: CRAZY-ASS WHITE BOY!

Roman: He did the stare and drive on you, didn't he? He got that from me.

Roman Pearce: Don't even think about takin' the convertible. It might loosen your mousse. Brian O'Connor: No, that's cool. That's too much chrome for me anyways.

Roman: [to Enrique and Roberto] Verone pay ya'll to keep a straight face like that? 'Cause If I was makin' money, shit, I'd get that mole removed off my damn nose.

Brian O'Connor: [after Brian and Rome escape and Tej and Suki get cited by the police] Thanks a lot, Tej. You're the clutch. I owe you one big time. Tej: [staring angrily at the officer] Yeah, Brian, you really do owe me, man. You really do. [Suki elbows Tej] Tej: Us. Suki says you owe *us*, aight?

Roman: Only my homeboys call me Rome, pig.

[to Roberto] Roman: Enjoyin' the ride? Man, it's a fast car, huh? Man, it's a classic. Old school. American muscle. Man, this car can do all kinda things, man. Wanna see?

[when Brian crosses the finish line first] Roman Pearce: Got two new cars! That's all my man! Korpi: Damm! Roman Pearce: Y'all ain't ready, homeboy! Get to walking, Fabio. [as they were leaving] Roman Pearce: Use them bus tokens, partner!

Brian O'Connor: [Grabs Roman] Same old Rome, doing the same old stupid shit Roman: [Shoves Brian off] Get up off me man Brian O'Connor: Listen, running your mouth? Insulting people? Stealing Verone's shit? Roman: You thing ima let somebody stare me down? I ain't let nobody stare me down in jail homeboy. You think ima let it fly on the beach? Roman: [Mocking Carter] Brian O'Connor: "And you; I'll take my cutter back" Rich ass... Brian O'Connor: And you're packing! Roman: Like you ain't! Roman: [Looks at Roman then walks away] Roman: Exactly...

Brian O'Connor: Man, when you start eating so much? Roman: I was in jail, breh. I know how shitty the grub is on the inside. With the way things are shaping up out here right now, it'll be a matter of time before I'm back in there, or dead. So I'm trying to eat all I can, while I can. Plus, the doctor tell me I got a high metabolism.

Roman: You're not gonna do what I think you're gonna do. Brian O'Connor: Yeah, I think so.

Roman Pearce: The old man's gonna blow our cover before we even get started. Agent Markham: [holds gun at Brian and Rome] Stop right there! Hands where I can see them! Brian O'Connor: What's going on here? Agent Markham: Hold this. [tosses Agent Dunn his pistol] Agent Markham: You think you can shoot at me? I'm a goddamn federal agent!

Roman: What this job you have for us anyway? Carter Verone: Come with me. The house has ears in it. [Carter tosses his cigar out] Carter Verone: I have something I want you to carry from North Beach to the Keys. Brian O'Connor: What is it? Carter Verone: Just put in the car what I tell you to, drive it to me and don't let anybody stop you. Understand? Brian O'Connor: Yeah. Any chance of cop trouble? Carter Verone: No. I'm buying you a window of time, but it's not gonna be open very long. You make it, and I'll personally hand you a hundred G's at the finish line. Roman: [getting greedy] Make it a hundred G's a piece, papi. Look, man, obviously, your pockets ain't nervous. Carter Verone: [Roman reaches for Carter's left pocket when he grabs his hand] Hey, hey, hey! Don't ever touch me. Roman: Ours are empty. Like I said, we hungry.

Roman: Fuentes in with Verone, Markham trying to blow our cover and we got two wired cars that are better than that ankle braclet of mine. Ima tell you, bro. You let your man, Markham do that shit again in front of Verone, that gonna be our ass. Brian O'Connor: I know man its getting thick real quick. We need some way out through some kind of exit strategy. Roman: Exit strategy, huh? Brian O'Connor: Yeah. Roman: [Roman takes a bite out of his sandwich] I like the way that sounds. Wachu got in mind? Brian O'Connor: I don't know man, but we need two more cars.

Tej: Do I even wanna know where the Skyline is, Dawg? Or where you've been for the past couple'a days? Or where the hell you got these rides from?

Roman: [to Enrique and Roberto] How much he pay ya'll anyway? Every time I see ya'll, man, ya'll got the silk shirts on, jewelry, you know, lookin' real Miami. You know? I caught you walkin' up in the club, you got the hamburger meat all hangin' out, you know?

[about the Evo] Brian O'Connor: All right, let's see what this thing can do.

Tej: All right. You each got a barrel to go around down at the end of the road here. Second wave gotta sit tight till your partner crosses this line right here. First team to go down and back twice wins the race... at which point, the losers WILL hand over them keys. Otherwise, you'll be eating breakfast through straws from now on.

Carter Verone: [to his potential wheelmen] Thank you for coming on such short notice. My red Ferrari was confiscated yesterday, and it sits in an impound lot in Little Haiti. It's about 20 miles from here. The car isn't important. What is important is the package I left in the glove box. The first team back here with the package will have an opportunity to work for me. Darden: Are you saying we gotta audition? Carter Verone: Nobody's got a gun to your head. That's it.

[Carter reveals the package was a cigar] Roman: We did all that for a damn cigar? Carter Verone: No. You did that for a job.

[During the opening race, Suki is trying to pass a rival] Suki: Move, bitch!

Brian O'Connor: Hey, Jimmy! We got any half-empty bottles of nitrous laying around? Jimmy: Sure, but I already loaded you with spray. Brian O'Connor: I'm thinking we may need it for something else. 'Cause our cars may get a little crowded.

Enrique: You know, I like you. But I still gotta kill you. It's my job.

Jimmy: Evo? Where'd you get an Evo from?

[Brian, Roman, Carter, Monica, Roberto, and Enrique walk into a special room in the back of Pearl, a nightclub; Brian and Roman sees a blowtorch, a cloth, and a bucket] Roman Pearce: What's all that? Carter Verone: We're gonna have a little fun. [Carter pops open a champagne, then pours Monica a glass] Monica: Thank you.

Brian O'Connor: Oh yeah you think you're the bomb, home?

[first lines] Tej: Yo, Jimmy, man, give me the status. Tell me we good.

Roman: Why must I chase the cat?