1984 (1984): Longing for freedom, the lowly bureaucrat of the Ministry of Truth, Winston Smith, summons up the courage to write down his unspoken desires in his little secret diary. Serving silently at the pleasure of the grim, autocratic hyper-state of Oceania, Smith knows that the English Socialist Party's supreme leader, the omnipotent Big Brother, watches his every move, condemning the already terrified people into a life of slavery. Under those dire circumstances--as the totalitarian government's suffocating stranglehold tightens more and more--Julia, another equally seditious party member, crosses paths with Winston, and a dangerous clandestine affair begins. Now, there's no turning back, and, sooner or later, the illicit couple will have to pay for its hideous crimes against the dictatorial state. What makes a good citizen? 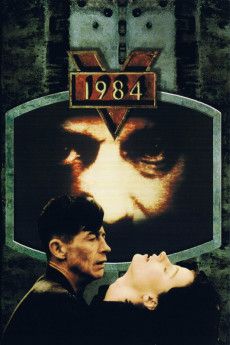 Winston Smith: [reads from Goldstein's book] "In accordance to the principles of Doublethink, it does not matter if the war is not real, or when it is, that victory is not possible. The war is not meant to be won. It is meant to be continuous. The essential act of modern warfare is the destruction of the produce of human labor. A hierarchical society is only possible on the basis of poverty and ignorance. In principle, the war effort is always planned to keep society on the brink of starvation. The war is waged by the ruling group against its own subjects. And its object is not victory over Eurasia or Eastasia, but to keep the very structure of society intact." Julia? Are you awake? There is truth, and there is untruth. To be in a minority of one doesn't make you mad.

O'Brien: Power is tearing human minds apart and putting them back together in new shapes of your own choosing.

O'Brien: If you want a vision of the future, Winston, imagine a boot stamping on a human face forever.

[Winston writes in his forbidden diary] Winston Smith: [voice-over] April the 4th, 1984. To the past, or to the future. To an age when thought is free. From the Age of Big Brother, from the Age of the Thought Police, from a dead man... greetings.

[Winston and Julia are watching the washerwoman] Winston Smith: She's beautiful. Julia: She's a metre across the hips, easily. Winston Smith: That is her style of beauty.

Winston Smith: It's not so much staying alive, it's staying human that's important. What counts is that we don't betray each other. Julia: If you mean confessing, we're bound to do that. Everybody does. You can't help it. Winston Smith: I don't mean confessing. Confessing isn't betrayal. I mean feelings. If they can make me change my feelings. If they can stop me from loving you, that would be real betrayal. Julia: They can't do that. It's the one thing they can't do. They can torture you, make you say anything. But they can't make you believe it. They can't get inside you. They can't get to your heart.

Winston Smith: We are the dead.

Winston Smith: [reciting poem] Under the spreading chestnut tree / I sold you / You sold me.

Winston Smith: I know you'll fail. Something in this world... some spirit you will never overcome... O'Brien: What is it, this principle? Winston Smith: I don't know. The spirit of man. O'Brien: And do you consider yourself a man? Winston Smith: Yes. O'Brien: If you're a man, Winston, you're the last man. Your kind is extinct. We are the inheritors. Do you realize that you are alone? You are outside history. You unexist. Get up. [Winston gets up and O'Brien shows him his reflection in a mirror. Winston is disheveled and beaten] O'Brien: *That* is the last man. If you are human, *that* is humanity.

[Charrington and Winston look at an old sketch of a church] Charrington: Oranges and lemons, say the bells of St. Clements... Winston Smith: What was that? Charrington: Something old...

Winston Smith: Look, I hate purity. Hate goodness. I don't want virtue to exist anywhere. I want everyone corrupt. Julia: Well, I ought to suit you, then. I'm corrupt to the core. Winston Smith: Do you like doing this? I don't mean just me... Julia: I adore it.

Winston Smith: [In Winston's diary] [voice-over] Winston Smith: Freedom is the freedom to say two plus two equals four. If that is granted all else will follow.

[Winston writes in his forbidden diary] Winston Smith: [voice-over] If there is hope, it lies in the proles. If they could become conscious of their own strength, they would have no need to conspire. History does not matter to them.

O'Brien: There are thought criminals who maintain that the resistance is not real. Believe me, Winston, it is very real. Perhaps you are not familiar with how it operates. Winston Smith: I am attentive to the news. O'Brien: Indeed. Then perhaps you imagine a huge network of conspirators prepared to commit any atrocity to weaken and demoralize the order of our society. The reality is infinitely more subtle. If Goldstein himself fell into the hands of the Thought Police, he could not give them a list of his agents. Such a list does not exist. They are not an organization in the sense we know. Nothing holds it together but an idea. Individually, they cheat, forge, blackmail, corrupt children, spread disease and prostitution, in the name of spreading knowledge from generation to generation, until... in a thousand years...

O'Brien: You once asked me, Winston, what was in room 101. I think you know. Everyone does. The thing that is in room 101... is the worst thing in the world.

O'Brien: There is no loyalty but loyalty to the Party. There is no love except love of Big Brother. All competing pleasures we will destroy.

[speaking almost inaudible in the short film over the Two Minutes Hate rally] Goldstein: Nothing the Party says is true. Nothing the Party does is good. Even the war itself isn't real. The Party wants you to believe we are at war so as to channel your aggressions away from the rightful target, the Party. Big Brother is not real. He is pure fiction, created by the Party. The real rulers of the state of Oceania are are unknown, faceless manipulators of the Inner Party who, because they are not known, are able to wield power without let or hindrance. People of Oceania, you are being duped. The Party doesn't serve it's people, it serves itself. We are not at war with Eurasia. You are being made into obedient, stupid slaves of the Party. Open your eyes. See the evil that is happening to you. The Party drops bombs on its own citizens. It is the Party, not the Eurasians, who are our enemies. Rise up. Throw off the yoke. You have nothing to lose, and everything to gain. People of Oceania.

O'Brien: We shall meet in the place were there is no darkness.

Winston Smith: They got you too? O'Brien: They got me a long time ago.

O'Brien: Smith? I have been reading your Newspeak articles in the Times. Winston Smith: Yes? O'Brien: You write it very elegantly. That is not my own opinion - I was recently talking to a friend of yours who is an expert. His name... has slipped my memory for the moment. What I wanted to say is that there were one or two unwords, only very recent. Have you seen the 10th Edition of the Newspeak Dictionary? Winston Smith: No... we're still using the 9th Edition at MinRec. O'Brien: A few advance copies have been circulated - I have one myself. You might be interested? Winston Smith: Yes! O'Brien: There are some plusskillful new developments. Let me give you my address. [gives Winston a card] O'Brien: I am usually at home in the evenings. If I am not there, then my servant will give you the Dictionary.

[Winston describes visiting a prostitute in the off-limit proletarian areas in his diary] Winston Smith: [voice-over] It was three years ago, on a dark evening. Easy to slip past the patrols, and I'd gone into the proletarian areas. There was no one else on the street, and no telescreens. She said, "Two dollars," so I went with her. She had a young face, painted very thick. It was really was the paint that appealed to me: white like a mask, and bright red lips. There were no preliminaries. Standing there with the smell of dead insects and cheap perfume, I went and did it just the same.

[first lines] Big Brother: [voice-over] This is our land. A land of peace and of plenty. A land of harmony and hope. This is our land. Oceania. These are our people. The workers, the strivers, the builders. These are our people. The builders of our world, struggling, fighting, bleeding, dying. On the streets of our cities and on the far-flung battlefields. Fighting against the mutilation of our hopes and dreams. Who are they?

O'Brien: In our world, there can only be triumph and self-abasement. Everything else, we will destroy.

Winston Smith: How's the Newspeak Committee? Syme: Working overtime. Plusbig waste is in adjectives. Plusbig waste is timing the language to scientific advance. Winston Smith: Yes... Syme: It's a beautiful thing, the destruction of words. You wouldn't have seen the Dictionary 10th edition, would you Smith? It's that thick. [illustrates thickness with fingers] Syme: The 11th Edition will be that [narrows fingers] Syme: thick. Winston Smith: So, the Revolution will be complete when the language is perfect? Syme: The secret is to move from translation, to direct thought, to automatic response. No need for self-discipline. Language coming from here [the larynx] Syme: , not from here [the brain] Syme: . Tillotson's Friend: [leans over from another table] Excuse me for intruding. But what you're saying is that we should be rid of the last vestiges of Goldsteinism when the language has been cleaned. I couldn't be more in agreement with you, brother.

O'Brien: Get up. Winston Smith: Argh! O'Brien: Look at you... you're rotting away.

Inner Party Speaker: They have attacked an unarmed village with rocket bombs and murdered 4,000 defenseless, innocent and peaceful citizens of Oceania. This is no longer war. This is cold-blooded murder. Until now, the war has been conducted with honor and bravery with the ideals of truth and justice in the best traditions of mankind... until this moment. Brothers and sisters, the endless catalog of beastie atrocities which will inevitably ensue from this appalling act must, can, and will be terminated. The forces of darkness and treasonable maggots who collaborate with them must, can, and will be wiped from the face of the Earth. We must crush them! We must smash them! We must stamp them out! We the people of Oceania and our traditional allies, the people of Eurasia, will not rest until a final victory has been achieved. Death of the eternal enemy of Oceania. Death! Death! DEATH! Brothers and sisters, one week from now in this very square we shall, as a demonstration of our resolve and show of strength execute publicly the same number of East Asian prisoners by hanging, drawing and quartering!

Charrington: My woman's dead. I'm just trying to sell the furniture. It's a beautiful bed... if you can get the bugs out of it.