101 Dalmatians 2: Patch's London Adventure (2002): Roger, Anita and their canine clan are packing for the big move to Dalmatian Plantation, a home in the country with plenty of room for the 101 pups and far from the clutches of Cruella DeVil. The feistiest pup, Patch, feels lost in a sea of spots and longs to be a one-of-a-kind wonderdog like his TV hero, Thunderbolt. While watching the Thunderbolt Adventure Hour, Patch hears about a chance to appear on the show while it's filming in London. However, the family move will interfere with Patch's opportunity - until he's accidentally left behind in the commotion. Patch heads for the audition to meet his hero. Meanwhile, Thunderbolt's "trusty" sidekick, Lightning, reveals that the producers of the show want to replace Thunderbolt with a younger dog. In order to save his job, Thunderbolt decides he will go into the real world and perform an act of true heroism to prove himself. A veritable reference book to Thunderbolt's many adventures, Patch provides the perfect guide for the TV star in ... 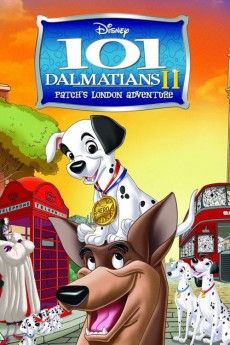 Thunderbolt: [about getting hit in the head by Cruella DeVil] That hurt. That really hurt! Patch: I knew you were faking it. Lightning: [suddenly, out of nowhere, he appears and chuckles] He's been faking it, all right. Thunderbolt: Lightning, little buddy. Lightning: I am NOT your little buddy! And you are no wonder dog. This kid trusted you, and look where it's got him. Patch: What's he mean? Lightning: He's been lying to you all day, kid. He doesn't care about you, or your family. He was just trying to get his name in the paper, and SAVE his job. Ask him! Thunderbolt: NO! [suddenly attempts to come clean] Thunderbolt: Well, yeah, but - but... Lightning: [in a mocking tone] But - but - but. Hey, Genius! You're no hero! You're a fraud! [In a treacherously slime-ball tone] Lightning: And by the way, there never really was a plan to recast you. I just had to get you out of the way. [grins evilly at him, then starts to head back toward the exit with a wicked chuckle and a devious look on his face] Lightning: And now, I get to go take your place on the show! MY SHOW! [laughs a big evil laugh, and exits, just as it is about to storm outside]

Patch: You lied to me? Thunderbolt: I put on an act. I'm an actor. It's what I do. Patch: But you said I could be your junior deputy. Thunderbolt: I made all that up. I-I just needed someone who knew the script. Patch: But you... You said that you'd help us! Thunderbolt: Ohhh, don't you get it, kid? All that running around and saving the day stuff, it - it's make-believe! It's not real!

Lars: Oh, fickle bird of inspiration! To what far shore have you flown?

[first lines] Pongo: It seems like such a short time ago that my pet and I were just lazing about in our little London flat, living the humdrum bachelor life and wishing things weren't so very, very dull. That's my Pet, Roger. My name's Pongo.

Cruella: Your muse has returned! Lars: But I am a failure. You should despise me. Cruella: Oh, stop being such a wet blanket and come see what I've brought for you. Lars: A gift... For me? How very "Christmas morning with the twinkle lights" of you. Cruella: A gift of inspiration! Lars: Well, of course. These are only [pulls out dalmatian puppy] Lars: just about the most adorable little puppies... I've ever seen in my whole life! Look at these cute little darlings! Oh, a fuzzy wuzzy little puppy poo! Poo-poo. Little puppy poo. Did you see that? Did you see that? He gave me a widdle kissy! I'm gonna kiss him back. Jasper: [to Horace about Lars] He's having a wobbly. Lars: And you mean for me to do a painting of them, don't you? That's an absolutely lovely idea! It makes me smile a lot. Cruella: [to Horace and Jasper] "Painting of them," he says. No, no, no, darling. I don't want you to make art of the puppies. I want you to make art with the puppies. Use their coats as canvases. Create a masterpiece in a new medium. Together you and I will stun the art world...... with our ruthless originality! Lars: But that means [horrified] Lars: How could you do such a thing to the cute little puppies? Jasper: Poison them Horace: Drown them. Cruella: Bash them in the head Lars: I may be eccentric, but I am not... A SICKO! Cruella: [angered] What? Lars: You'll not hurt one spot...... on these innocent little creatures' heads! Not as long as I have anything to say about it! [Gets tied up and gagged upside down] Cruella: I thought you were a man of vision someone who understood my passions who understood the complexity that is Cruella! Does no one get the point? Oh, Lars, you're such a disappointment. Oh, well. If I can't have a masterpiece... at least I'll finally have a fabulous Dalmatian coat. That's almost as good. Don't you agree?

Thunderbolt: [lands on a cat after 'saving' it from being stuck in a tree] There you are, my good man. No need to thank me. The look on your face is thanks enough. Now smile for the cameras. [No one is taking pictures] Thunderbolt: Hey, that's strange. Where are all the photographers? The press is always around when I do something. What's the matter with you English people? Are you all having tea? How am I supposed to get my job back if you're all having tea?